When I interviewed for a position with Blackstone Valley Prep almost three years ago, my perception of “charter schools” was very different from what it is today. While teaching in the deep south what I learned about them came from second-hand reports. I was told that charters hand-picked students to maintain high performance and test scores. I was told that they pushed out students who didn’t fit “their mold.” I was terribly misinformed and as a result seriously questioned joining BVP’s staff. Today, I’m very thankful that I decided to be open-minded and experience Blackstone Valley Prep for myself.

After becoming a part of BVP’s team and family in 2014, I quickly realized that the student population here wasn’t all that different from what I experienced in the traditional public schools I had previously taught at for seven years. Moreso, it was nothing like what I was led to believe. The children had not been hand-picked and were not all the same. Just like the students I had taught previously, these scholars were at various academic levels. There were still students that needed extra academic support and children who needed a little extra love to get through the day. Classrooms still held more than 25 different personalities and learning styles. Scholars were not kicked out for not doing their homework like I was told. They were not pushed out of the system for getting anything less than a perfect score on an assessment or for not paying attention 100% of the time. BVP embraced each scholar’s differences and worked tirelessly to support them.

There is one big difference that sets BVP apart from the experiences I had while teaching in other schools though: the culture.

Scholars are never left behind here. Our teachers work hard, long hours and make themselves available in the evening and on weekends to help scholars master content. They attend sporting events and dance recitals outside of school hours to show support and how much they care.

I am very grateful that I made the leap to move across the country to the smallest state with the longest name to be a part of this amazing organization that works relentlessly to meet the needs of all scholars. To get a bigger glimpse into the culture at BVP I invite you to watch the video linked below. I could go on forever telling you how special it is, but the written word alone would not do it justice.

Our scholars here mean the world to me and so I also invite you to consider helping Blackstone Valley Prep continue this work by making a donation today if you haven’t already. Every little bit helps as we work to support every scholar for success. 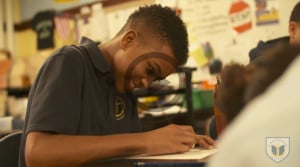