A Conversation with BVP’s Teacher of the Year

Ms. Dodd, a University of Rhode Island graduate in her seventh year at BVP, also serves as the school’s Multilingual Learner (MLL) Lead and Circles Chair.

We recently spoke to Ms. Dodd about her passion for teaching, creating a positive school culture, the importance of an MLL certification, and much more. 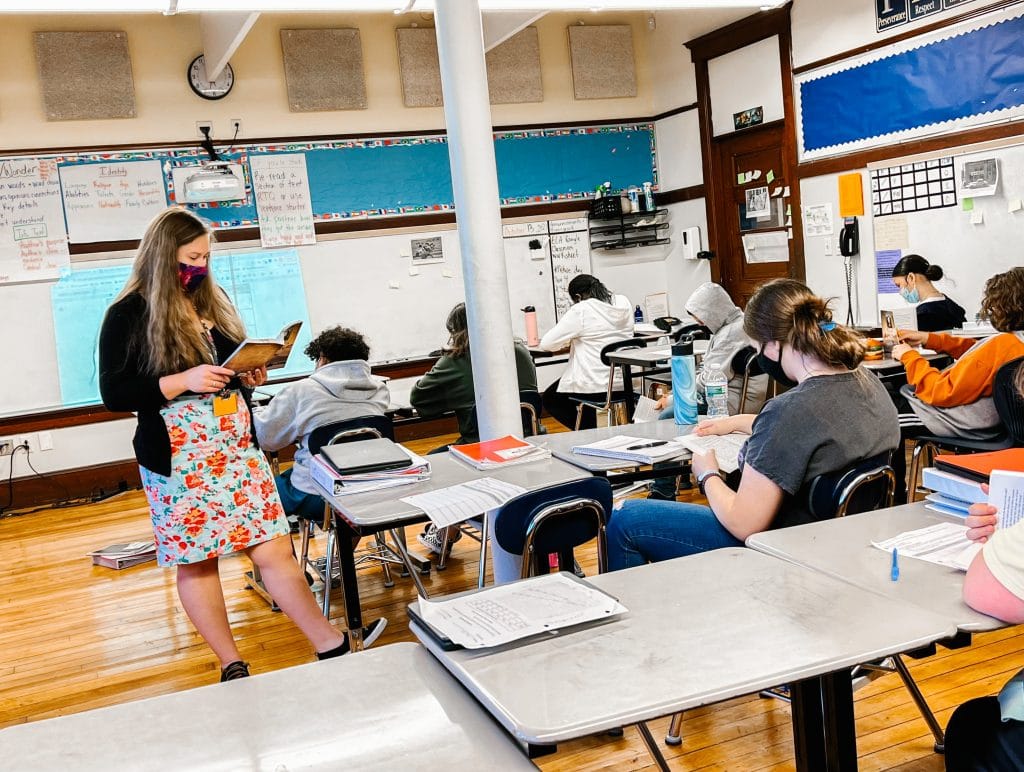 BVP: How did you choose teaching as a career?

BD: I started URI as an undeclared major, taking general education courses to figure out what I actually wanted to do with my life. I have always loved reading since I was very young, so I decided to be an English major. However, once I started actually considering career options during my sophomore year, I realized an English degree can be limiting, so I wandered up to the Education office where I met Dr. Diane Kern, who happened to be the department chair for Secondary English Education. She set me up to start taking courses and mapped out the entire Education curriculum requirements for me to be able to complete the double major by the end of my senior year. What started as a back-up plan became Plan A when I did my first teaching practicum and actually got to work with kids in a classroom. As soon as I was in that teacher role with real middle and high school children, I knew that I loved it.

BVP: What drew you to Blackstone Valley Prep?

BD: I applied for a position at BVP because I heard about the school from my fellow URI education alum [and current JHS Dean] Kelsey Joyce, who also happens to be my friend from high school. Once I learned more about BVP during the interview process, I was really attracted to the curriculum and the commitment to intentional diversity and DEI work.

BVP: You’ve spent years developing and improving the PBIS system at JHS (formerly Middle School 1). For someone who’s not familiar with PBIS, can you explain what that is, and why you felt it was important to take on this work?

BD: PBIS stands for Positive Behavior Interventions and Supports, which is basically a framework for creating a behavior system according to your school’s culture and context that is based on positive reinforcement. I entered the PBIS realm through our school’s scholar support team, because I was always deeply involved in planning extra supports for scholars having behavioral problems in the classroom. PBIS was a natural next step for me to be a part of when MS1 decided to implement the framework a few years ago. Originally, I just wanted to be part of the team who would develop behavioral systems and routines for our school, but my BVP colleagues kind of nominated me for a leadership role for PBIS and I accepted. Now several years later, we have continued to evolve and grow our PBIS system at JHS as a team, and I love being a part of something that has such a positive impact on our school culture as a whole.

BVP: Why did you choose to get your MLL certification, and how has it helped you in your role?

BD: I decided to pursue my MLL certification because I wanted to be a better teacher for the special populations in my class. Once I was in the Teaching English to Speakers of Other Languages (TESOL) program at URI, I knew I had found another teaching passion. It is exciting to be part of a team that is developing systems year-by-year to continue to better support our MLL population, especially at BVP, where so much of our scholar population is culturally and linguistically diverse. We have a long way to go (as does the entire state) in this field, but I love being part of something from the ground up.

BD: I’m very proud of the work I was able to do last year in supporting our MVP scholars during distance learning. Jenny Gonzalez, Steven DaRosa, Drew Bernard, and I took on the responsibility of running the MVP program for 7th and 8th graders, and we certainly had our work cut out for us dealing with scholars with high needs during the peak of the pandemic (although it seems weird to say that because who actually knows what the peak is?). We were able to form our own little community, and I became a jack-of-all-trades teacher—teaching and facilitating content in all the core subjects, not just ELA like I am used to. To see how that group of scholars, in particular my 7th graders, were able to grow and mature academically and behaviorally during those months is something I’m very proud of—not just my role, but the other adults who helped and the scholars, as well.

BVP: Finish this sentence. Scholars in my class can expect…

BD: That I will love them where they’re at, provide them with what they need, and I always expect their best.

BVP: What is your favorite and/or the most rewarding part of your job?

BD: Witnessing the long-term growth of my scholars as whole humans as they travel through my classroom and on to their next step.