Coaching Students to Find Their Own Voice 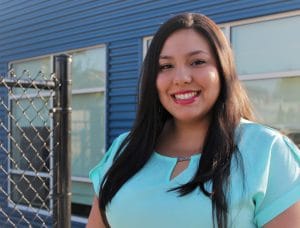 Lissette’s parents came to the states from Medellin, Colombia in search of the American dream. While her Dad didn’t have the same opportunity she did to go to school, he found work as a custodian and eventually launched his own cleaning business. Lissette reflects, “as the daughter of immigrants, I owe it to them to make it as far as I can go.”

In high school, Lissette found herself intrigued by the complexity of the brain and its language functions. Having been exposed to both Spanish and English since she was born, she remembers, “language was such an important aspect of my upbringing and of my culture. I can’t imagine not being able to communicate. I felt called to help others who had challenges, to help them find their voice.” So she set her sights on a career in Speech Pathology, attending the University of Central Florida and later Portland State University for graduate school.

Her students span a spectrum of unique needs: students with autism who have difficulty with social skills, students with voice and swallowing disorders, students who stutter, and those with other complex communication needs.

“There is so much involved in how we communicate: language differences, dialects, how we move our bodies. For example, with some of my younger students, I may be working with them to focus on eye contact. Helping them to remember that someone else is there. For my bilingual students, I work t o support their heritage language. I can’t explain how powerful it is to support children who are not only exposed to a second language, but who literally need that language in order to function in their personal lives.”

While her Speech Pathology work covers everything from “the larynx to the brain,” it’s clear that so much of what Lissette does is heart to heart. “It’s not so much fixing a problem, but working with students to embrace their differences. In the end, it’s more psychological. It’s about building self-esteem.”

Lissette Castrillon is a native Rhode Islander and a new staff member at BVP.

September 15th – October 15th is Hispanic Heritage Month. This blog feature is one of many that highlight the incredible stories and layers of diversity in our school community.