According to computerscience.org, a comprehensive online archive of resources about women in computer science, the percentage of women working in computer science-related professions has steadily declined since the 1990s, dropping from 35% to 25% in the last 15 years, despite there currently being over 500,000 jobs in the field with a projected increase in coming years. Think about that. Our presence in the field is not just low, it’s trending downward.

As a rising senior at Blackstone Valley Prep, an AP computer science student, leader of the robotics’ software engineering department, and a woman, the statistic above honestly confuses me. Why would women be leaving computer science when it is on the rise? The more I ask myself these questions, the more I can’t help but think that part of the answer is simple–lack of exposure for women at an early age.

On my small robotics team at the BVP High School (Go team 9370!!!) I am one of only two girls. At most robotics competitions most teams, especially the “leaders”, are comprised entirely of boys. All computer science classes at my school are led by male teachers. So are the science classes, and all but one math class. That said, BVP’s Director of STEM is a woman! Shout out to you, Mrs. Primiani!

I’m grateful that BVP set an expectation for my peers and me to take intro to coding our freshman year that focused mainly on HTML and Javascript. That said, I don’t know that I would have picked that class myself if it were offered as an elective instead of a requirement.. My sophomore year, I joined the robotics team, not really knowing what to expect, but I did it simply because my dad suggested it and because a robot high-fived me once during a demonstration!

During the first couple of weeks on the robotics team there wasn’t much for me to do; I hadn’t found my place on the team quite yet, and that was okay. Instead I took a clock our coach had bought and tinkered with that, trying to get it to work. The team’s coder left and I jumped on the opportunity to be the team’s coder. I found myself learning Scratch on MIT App Inventor. Seeing the robot come to life with little tidbits I’d written and working to debug the mishaps those tidbits sparked such fantastic interest in computer science that I ended up taking AP Computer Science A my junior year and I am excited for AP computer science Principles in my final year of high school.

But I can’t help thinking what would have happened if I had never joined the robotics team. Never in my life would I have thought I would love (and occasionally hate) coding as much as I do now. I understand that sometimes it is just a question of interest, but in an economy where millions are unemployed, a growing field should have increasing amounts of women who want to be part of it, not the other way around. So again, I go back to the idea of lack of exposure. Had I just stopped at HTML and Javascript I would not be here today, typing about a computer science camp I planned and executed. 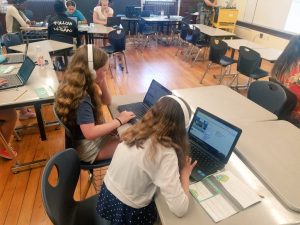 Near the end of the school year, after reading an article that the Executive Director of BVP shared with me about a local private school running a girls coding camp, I decided to take things into my own hands and do something for my community.Within a week I had drafts and ideas, applications and surveys, posters and a constant stream of emails to work on improving my plans. I had no idea what I was doing, but I was committed to making sure that these girls knew that coding wasn’t just web design and text of a screen, instead I wanted to teach them that coding and computer science is an interactive experience for everyone, and not just for “nerds” who sit behind a computer screen stuffing Cheetos in their face. Ultimately, with the help of Google CS-First and Scratch, the robotics robot, and so many people on the BVP network and in the BVP high school, the far-fetched idea became a reality. 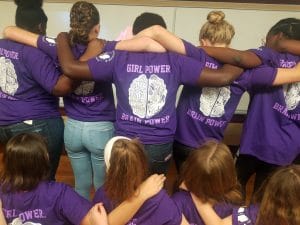 During the week of July 10 – 14, eleven girls beginning fifth to eighth grade this fall at BVP, joined by five high school scholar staff members came together for some of the most fun I’ve ever had at school–and with coding. Every day was a different schedule, with activities like Programmer Says and Draw Like A Robot, guest speakers from Sproutel, NASA, Ximedica, and Girl Develop It, and coding online and with a robot. Each day I worried that the girls weren’t engaged on the computers, or having fun with the CS-First, but every time I asked if they wanted to move on, they would ask for ten more minutes. I have never seen so much joy. Even the most shy class members came out of their shells by the end of the week, asking to share their projects on Scratch and raising their hands to drive the robot.

One of my takeaways? I don’t want to be the only woman in the room at my job. One of our guest speakers, Catherine Zarra, told us the story of Clippy. Microsoft was getting almost unanimous dislike from women towards it, and it was only because of the woman in the room that Microsoft addressed this issue. No story is more fitting than this one to reinforce, if nothing else, the importance of having women in all rooms–including rooms of computer scientists.

This year I will graduate and leave for college, so the future of this camp is unknown. I hope this is only the start of a growing tradition of computer science for girls at BVP. No doubt I will pop back around to make sure the robotics department is running smoothly with all of these amazing girls leading the way! 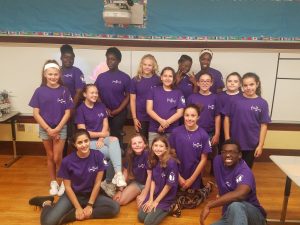