This is essay was recognized as the winning essay submission for BVP’s 1st Martin Luther King, Jr. Essay Contest. This essay is posted here with permission of the author.

My brother and I, crisscrossed, foreheads furrowed in concentration, the man with the top hat floating above the words written onto the board.

On my brother’s turn, he picked up a “go to jail” card. It seemed innocent enough, until he said, “Black people always end up in jail.” I could not believe what I had heard. My eight-year-old brother was unknowingly resigned to his fate: the prison system. I could not breathe. Responding to my facial expression, he simply said, “What? Isn’t it true?” As a young teenage black woman, I had not understood the facts around the shooting of Michael Brown or the outbreak of unarmed black men being shot and killed.

I wanted to believe that my brother would be young and innocent forever,that I would be able to shield him from the world of racism and systemic injustice, a world I thought I knew well. But I realized that it could’ve been, and still could be him.

Diversity means distinction; a difference. I had never realized the importance of diversity until I started middle school. Before then, I attended two predominantly white elementary schools. Within these elementary schools, I faced racial discrimination, prejudice, and an entirely different culture that hurt me in ways I did not know until I entered an intentionally diverse school. I had not realized that the isolation I faced from my teacher in fourth grade hurt me academically until the end of the year when I noticed that I was the only one behind in certain subjects. Because there was no diversity where I was spending the majority of my time, I was lacking different perspectives, and as a consequence, I lacked connection essential to a welcoming learning environment. Growing up, there was nobody who looked like me or came from the same experiences, and I felt isolated.

Personalities, ideologies, cultures, and ways of thinking are all ways a community can be diversified and educated. Due to my educational environment, I have learned more about the backgrounds of the people I am around, which has made me more intellectually curious. Whenever I am with new people, I find myself genuinely interested in their story, their upbringing, their passions, how they grew up, and who they are. However, diversity doesn’t have to only come from the people we are around. The types of media we consume, the friends we have, and what we read shapes who we are as individuals. To me, being around such varied ideas and interests has only made me willing to educate myself on important issues.

Martin Luther King Jr. had a dream that one would be judged by their character, not by their skin. I too have a dream that our education system can and will be better, starting with educating students and educators about different cultures and backgrounds. I fear that there are other children like my brother across the country who face stigma within their places of education and my dream is to one day erase that. 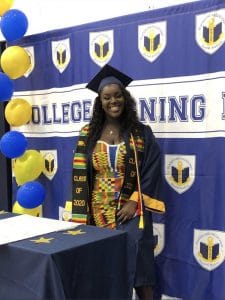