Nine years after BVP first opened its doors, ready to prove what is possible for our scholars, our first senior class is almost ready to embark on their journeys to college and the world beyond. 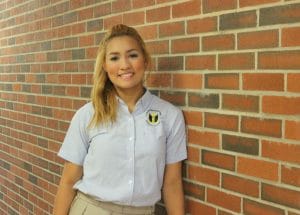 Back in November, BVP senior Gladis Ricaurte ‒ a first-generation college student ‒ blogged about her experience navigating the college application process. Now, nearly six months later and with graduation on the horizon, we followed up with Gladis to learn which university she plans to attend this fall, what sets a BVP scholar apart from other applicants, and what advice she has for this year’s junior class.

Back in November, you mentioned you were applying to 17 schools. Did that happen?

Originally, I made a list of 17 schools I thought I liked. I was very paranoid at the beginning of the year, which explains the exhaustive size of my list. I ultimately only applied to 12 schools. I was accepted to Boston College, Boston University, Colgate University, Florida State University, Providence College, Syracuse University, and the University of Miami.

Wow! That’s impressive. What was the hardest part of the application process? Did anything surprise you?

For the most part, I had anticipated the technical aspects (essay writing, recommendations, and self-advocacy). The hardest part was the emotional turmoil. The process definitely takes a lot out of you, especially if you feel like you are applying to competitive schools. I second-guessed myself many times (even up until decision day).

How long was the wait between when you applied to schools and when you received decisions? What were your emotions like during that period?

I applied Early Action to two schools and Early Decision to one school. The deadline for early applications was November 1st. My first decision came December 15th and my second decision came within the same week; my third decision came mid-January. Honestly, I just tried my hardest not to think about it until it happened.

Have you committed to a school? If so, which school and why?

I committed to Boston College! I chose BC because it is my second home. I participated in a three-week long summer program at BC when I was 16, and my brother lives around the corner in Brookline. Growing up, I spent my school breaks and portions of my summer around BC.

However, I didn’t make my final decision until I visited all three of my top choices: Boston University, Boston College, and Colgate University. I immediately crossed BU off my list because I knew I would not enjoy city life, and I preferred a college campus with a stronger sense of community.

When I visited BC, the Dean of Undergraduate Admissions, John Mahoney, delivered a speech for Admitted Eagle Day, and in his speech he spoke of Jesuit service and family values. In that moment, I knew BC’s focus on an individual’s character (and the development of that character to help make the world a better place) distinguished the school from the other amazing institutions I was considering. All of my schools had accomplished alumni, but Boston College is the only place I felt honed in on more than an individual’s accomplishments. BC prides itself on teaching servant leadership ‒ all with a perfect location, stellar academic curriculum, world-class professors, and strong core values.

I visited Colgate last. It is an amazing institution, but its location made me a bit uncomfortable. The closest pharmacy is an hour away, and there are only 3-4 restaurants in the town. The staff there really cared about me, but it ultimately came down to where I felt comfortable living for the next four years considering both schools are academic trailblazers.

BVP scholars have been accepted to some incredible schools. What makes a BVP scholar stand out from other applicants?

Since our school is much smaller than the traditional public school, I would say there are more leadership opportunities at BVP. Colleges love to see scholars assume positions of leadership in their community. Also, BVP’s academic rigor is exactly what top colleges are looking for, so I would encourage all scholars to take as many AP courses as possible.

What advice would you give to juniors who will be going through the college application process next year?

Just breathe. Everything will be alright. Take this process as an apparatus for self-reflection, and get to know yourself and your dreams better. If you’ve worked as hard as you think you have, I promise you, it will all turn out.

The rest of the senior class will reveal their official decisions at our first-ever College Signing Day later this month. Until then, we’re happy to share a comprehensive list of all the incredible colleges and universities our hardworking scholars have been accepted to:

College of the Holy Cross