When we sat down with Josian Quianes on a beautiful fall afternoon in a quiet corridor at BVP High School, we expected to talk about his senior year and the college application process: the preparation and the challenges; his course load and career aspirations; early decision and the months ahead. But what began as a typical Q&A, quickly turned into something greater: a personal narrative of determination and perseverance in the face of adversity. 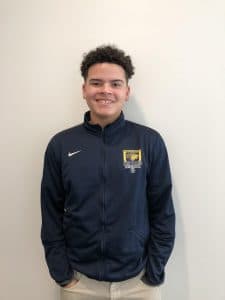 Josian and his family migrated from Puerto Rico when he was just four years old. From a young age, he watched his mother struggle to adapt to her new life in Rhode Island. The language barrier, he recalls, was a particular challenge; seemingly ordinary tasks like grocery shopping and interacting with a cashier caused deep-seated embarrassment. However, despite the obstacles, Josian recounts her work ethic – waking up early and coming home late in an effort to put food on the table and a roof over his family’s head.

With those moments ingrained in his memory, Josian spoke with poise, confidence, and directness well beyond his 17 years when asked about the importance of attending college: “As a future first generation college student, college is my way of telling my mom that all of her hard work is paying off. One day, I’m going to be successful, and I’ll be able to take care of you like you’ve taken care of my brother and me.”

Of course, the road to college is never easy. It takes time, will, preparation, and effort – a lesson he’s learned firsthand over the past year. “Last year, I couldn’t quite get going. I couldn’t get myself motivated,” he said. “This year has been a big lesson in time management. I’m taking things one step at a time, and I’m learning from past mistakes. Once I complete a task, I think ‘OK, now I can move on to the next thing, and then the next,’ so I don’t get overwhelmed.”

He continued: “Last year I’d simply come to school, throw on my headphones, walk in the building, and then leave without talking to anybody. I saw it was starting to affect my little brother, and I’m the only person he has.” (Josian has the considerable responsibility of caring for his younger brother after personal circumstances required him to step up last year.) “My little brother gave me a purpose. Through him I learned how to be a better role model. He showed me why I had to be successful in school.”

Josian’s innate compassion and propensity for empathy, in the face of sometimes relentlessly challenging personal circumstances, shapes how he sees and interacts with the world around him and is nothing short of inspiring. Josian believes in the power of community and in the foundational ethos of BVPHS – that, together, as a team and family, we can out hustle the world.
– David Jose, Dean of College and Careers

With newfound focus, Josian signed up for a rigorous senior-year course load. He’s balancing four Advanced Placement classes – Calculus, Literature, Statistics, and U.S. Government and Politics – caring for his brother, helping around the house, and applying to colleges. “It’s hard to have a social life yet maintain my academic goals and make sure I’m doing what’s best for my career,” he said. “I had to learn to find a quiet space in my room, cancel everything out, and do what I have to do.” He went on to say that the essay portion was the toughest part of the college application process: “It was a challenge making sure I met the school’s criteria but also making sure they got to know me as a person. Through my writing, I wanted them to feel how I was feeling and the experience that I was sharing.”

It’s safe to say his hard work and grit are paying off. Josian has gained admission to three colleges so far: Providence College, Western New England University, and Worcester Polytechnic Institute, a school he’s had his eye on for quite some time.

“I’ve always been interested in WPI because of my older brother. He graduated from WPI and is a civil engineer. He really shaped my upbringing, and I want to follow in his footsteps. I’m taking classes that challenge me so I would be a better applicant for that school. It’s highly selective, and I want to challenge myself and put myself around people who will challenge me.”

To be clear, Josian says he’s open to different types of engineering, not just civil. Ten years from now, he envisions himself living in the area and working on engineering projects for a local company.

When asked how, exactly, BVP is preparing him for “the world beyond,” he cites the collaborative environment. “I put myself around people who I know will push me and make me better. Mr. Jose (Dean of College and Careers) always pushes me. I don’t want to limit myself because of certain boundaries. We’re all a team and a family.”

Josian’s strong desire to consistently challenge himself with rigorous material is matched only by his tireless work ethic.
– David Jose, Dean of College and Careers